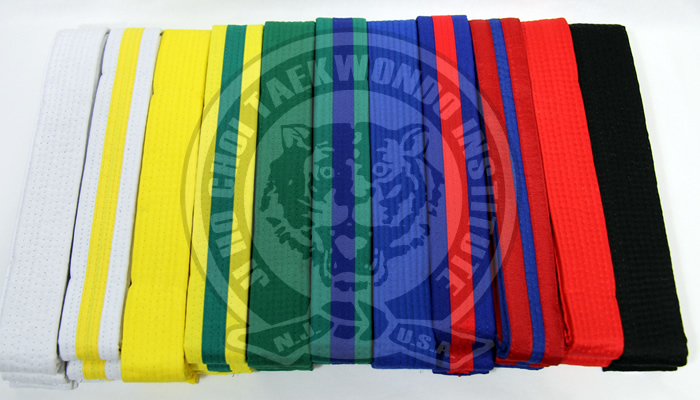 JiHoChoi TKD Institute uses one main belt system derived from Kukkiwon. Unfortunately, there are many schools using vastly different variations which can be confusing, especially if a student changes from one Tae Kwon Do dojang (what is dojang?) to another.

We hope that this blog post will help you better understand how TKD belts work.

The minimal time it takes to become a 1st Dan in Tae Kwon Do can be between 2 and 3 years, with belt promotions taking place approximately every 3 months.

The junior section typically consists of ten ranks indicated by the Korean word geup (a.k.a. “gup” or in Korean “급”). Geup literally meaning grade. The junior ranks are usually identified by belts of various colors so these ranks are sometimes called “color belts”.

Typically, advanced students will be assistants to the instructors, helping the senior belts, or Dan, teach demonstrating techniques or showing beginner students how to tie their belts for example.

The senior belt section is typically made up of nine ranks. Each rank is called a Dan (“단”) which may also be referred to as “black belt” or “degree” (as in “third dan” or “third-degree black belt”).

Black belts begin at 1st degree and advance to 2nd, 3rd, and so on. The degree is indicated on the belt itself with an embroidered with student’s name, Ji Ho Choi dojang name, and a number of stripes.

Click on any ranks for belt promotion study guides: